I have been wanting to write this post for a while now but I've waited until the dust has settled and Michael has had a spare moment. First, I have to say that my husband is the most supportive partner I could have asked for during this season. Yes, I used the superlative because he truly is amazing. He understands as best as he can the entire healing and adjusting process I am going through. He walks in the door at 5 pm ready to play with baby and cook dinner. He rocks and cuddles Genevieve all evening long so I can rest. He never ever hesitates to change a diaper. He actually made it the norm that when he is home it is his job to change diapers. I never question his ability to watch Genevieve while I run an errand. If it wasn't for breastfeeding, he would know and be able to do everything needed to care for our baby. Starting with the intense experience of birth to watching him fall in love with our daughter - I have never been more in love with this man.

I gave him 8 questions to respond to involving homebirths, labor, and parenting. He is very blunt and honest. I tend to be more politically correct and cautious but he tells it like it is and didn't want me to do much editing. But it is from his heart and it is something he is very passionate about as well. And I could not have had the birth I wanted if it wasn't for his complete support.
Q&A with Michael about childbirth and parenthood

ON THE BIRTH EXPERIENCE:
1. What were your initial thoughts about having a homebirth?
I was never in doubt or fear of the idea, though it wasn't truly on my radar until it became important for Merrill. Once I put some serious thought into it and did my research, I realized that it perfectly coincided with our lifestyle, our deeply held principles. For one thing, we both dislike hospitals, so it makes sense that if idyllic childbirth requires the mother’s comfort, the hospital is a bad choice. But more importantly, if childbirth is supposed to be utterly empowering for mothers—a sacred experience that only women can undergo—the American obstetric industry generally contradicts that.  The more Merrill and I researched, the more her enthusiasm for home birth intensified and my suspicion of obstetric intervention worsened. My argument was against something, hers was for something else.

2. What did you feel like your role would be in labor and birth?
I imagined myself in Merrill’s face constantly, not like a drill sergeant but like a rose-colored mirror, reinforcing the beauty and power Merrill was putting on display. I wanted to be with her, holding her through every contraction, bearing as much of the burden as I could without taking away from this intrinsically feminine experience. But I also knew that she’d be liable to punch me if I stayed in her face, so I equally anticipated being flexible and accommodating her every whim, even as I helped stick to the birth plan.

3. Were you ever scared about the process?
Nope.  The medical world is all about expecting the worst case scenario, but we don’t live our lives that way.  Yes, some things could go wrong. If so, we live 8 minutes from Vanderbilt. But Merrill is young, healthy, and educated, which makes her an ideal candidate for homebirth. Plus, we trust our midwife and the midwifery model of care. I guarantee that Merrill got more focused and noninvasive attention from Jennifer than she would by dozens of staff at the hospital. Merrill’s blog about why we chose a midwife explains it well.
I knew all this to be true so I had no reason to be scared. I did have one moment when I was worried that we may have to go to the hospital, though not for Merrill or Genevieve’s safety but because my wife then wouldn't get the experience she so deeply desired. During the actual birth, there were moments were things could have gone wrong but our midwife was fully capable to handle these issues.

4. How did you prepare yourself?
It began with The Business of Being Born, a documentary Merrill’s probably mentioned. It’s helpful by setting up the conversation and inspiring more in-depth research. I think it’s also good to get accustomed to the once-gross terminology and the image of a baby emerging from a vagina. Even though I resisted initially, I've seen more homebirth YouTube videos than I can count. After all that, since I was in grad school and taking a Theological Ethics class, I wrote my final paper on natural birth. It was a systematic argument against the traditional obstetric system and for women’s empowerment in birth. The research for that paper particularly helped prepare me because a grade was at stake. We also took the Bradley class, which is partner-coached, natural birth. Jeannie Casey’s class was really helpful for introducing dads to the basics (and then some), and especially getting them used to the lingo. I wish we could have finished the whole course, but alas, Genevieve arrived halfway through the series.

5. What did you and your wife gain from this experience?
A child. But seriously, that’s a huge question. The first thing is that if we didn't already feel like a unified couple, we now feel more trust and affection for each other than ever. For the first three days of Genevieve’s life, she was my second thought and Merrill was my first. Especially because the narrative of our birth was so dramatic and intense, the enormity of what Merrill accomplished made my jaw drop for days. I kept repeating “I’m so proud of you,” though not from a place of authority (like a dad would say it), rather from a deep respect and awe. Merrill is powerful and she will never lose my attention for that.
In addition, the birth sacralized our home.  It isn't gross that Merrill’s blood covered the bed where Genevieve was born and where we sleep, it’s sacred. It is the holiest experience of my life and it’s recapitulated by our nightly rituals of going to bed at night and cooking breakfast in the morning and watching the PBS News Hour at 6 pm. Never again will this house be ordinary. You can read the full birth story here.

6. Do you have recommendations for dads-to-be about labor and delivery?
Can I answer bluntly? Good.
Do it on purpose. Quite simply, you betray your family if you don’t educate yourself about the process, your options, and how you can support your partner.  Learn everything you can, and please get over all the stereotypical worries of not-yet-fathers. Practice saying placenta, cervix, and mucous plug over and over until it’s no longer weird, because it’s not.  And don’t put any sexist burden on your wife of trying to stay sexy while she gives birth; if you’re scarred by seeing your child emerge from your partner’s vagina, then you’ve got a lot more preparation to do. If it still bothers you, keep it to yourself.

ON PARENTING:
7. What have been the highlights of early fatherhood?
Aside from the typical ones, which include the daily epiphany Merrill and I have that we made a human together and that there’s a baby in our house and it’s ours and not somebody else’s, I like the little things Genevieve does. When she farts, it’s hilarious. When she sneezes, it’s epic. She recently found her upper lip and makes a funny sound when she sucks it in and blows it back out; I can’t imitate because I have teeth.

8. Do you have recommendations for dads-to-be about being a father?
I’m still so new at this, so I feel strange writing advice. But I suppose that I’ll tell dads these two things.
Breastfeeding is hard. Recovering from childbirth (of all varieties) is hard. Everything you do to help in those first weeks (like changing most of the diapers) still won’t add up to the challenges early moms face. Bear her burdens.
Secondly, trust your partner’s and your intuitions. It’s important to be informed and to seek advice, but don’t over-Google. We mammals are preconditioned to seek the best interest of our offspring. Fret not. 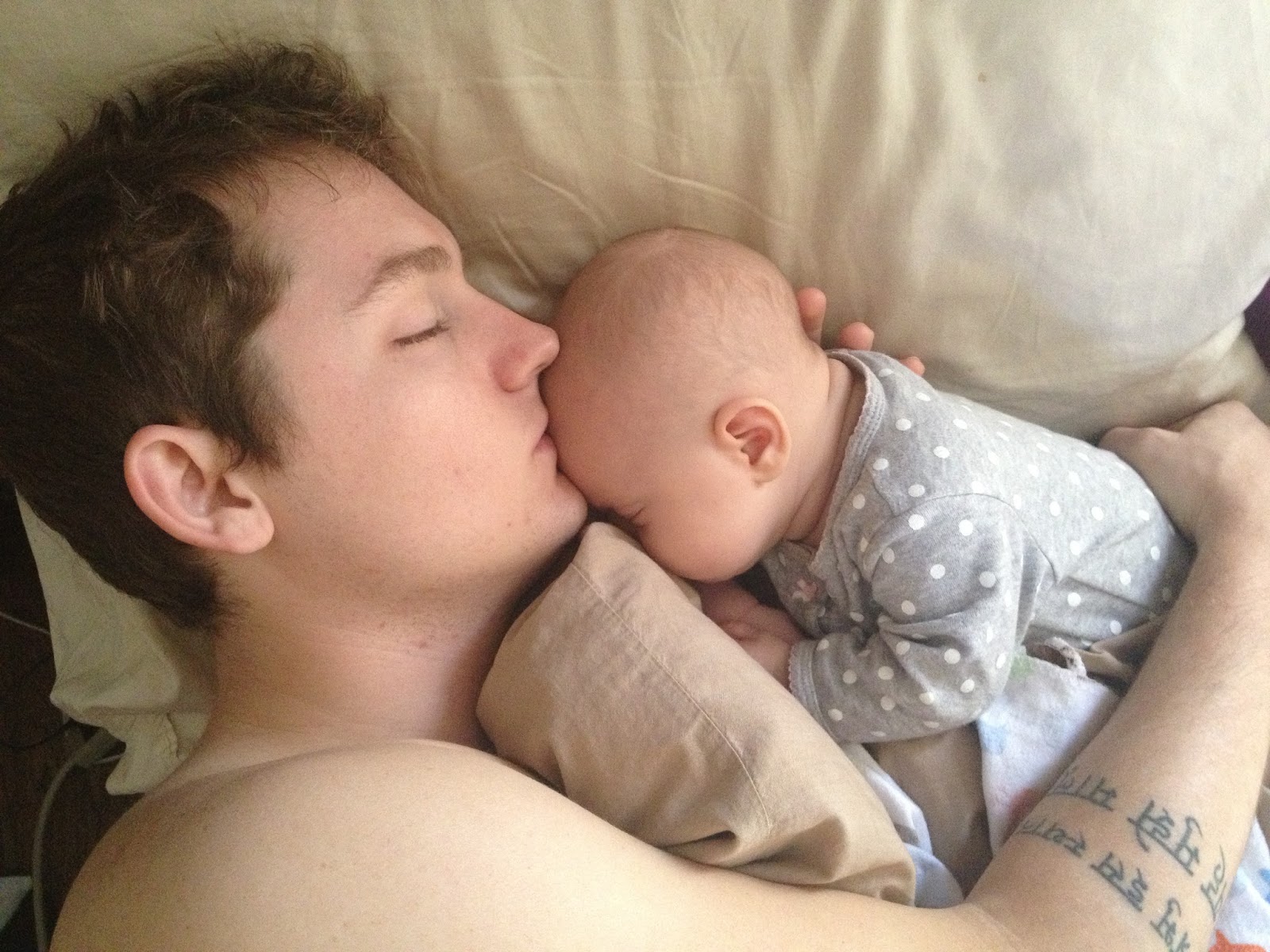 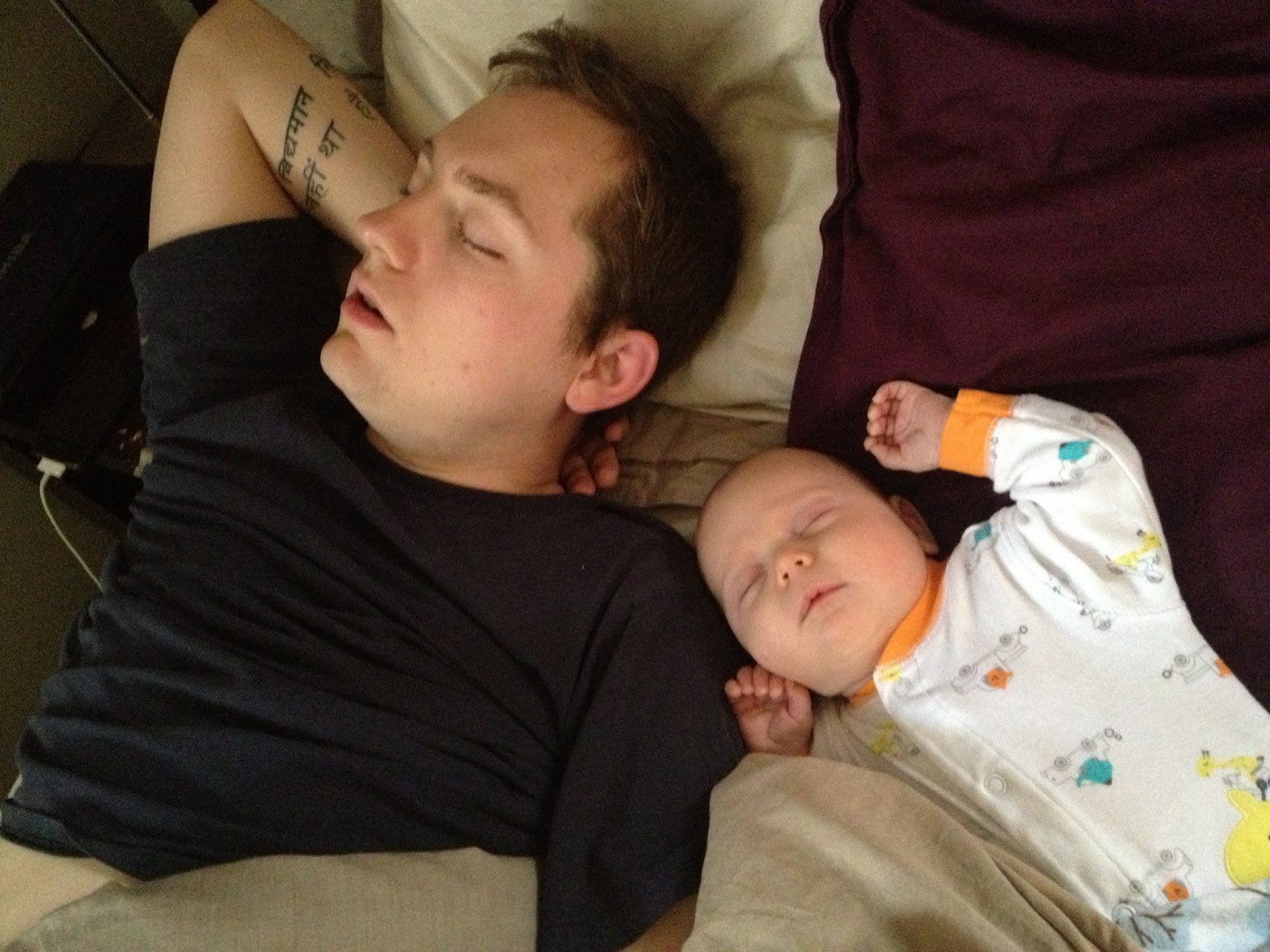 Goodness, I love these two :)

Posted by OurUrbanCottage at 12:42 PM