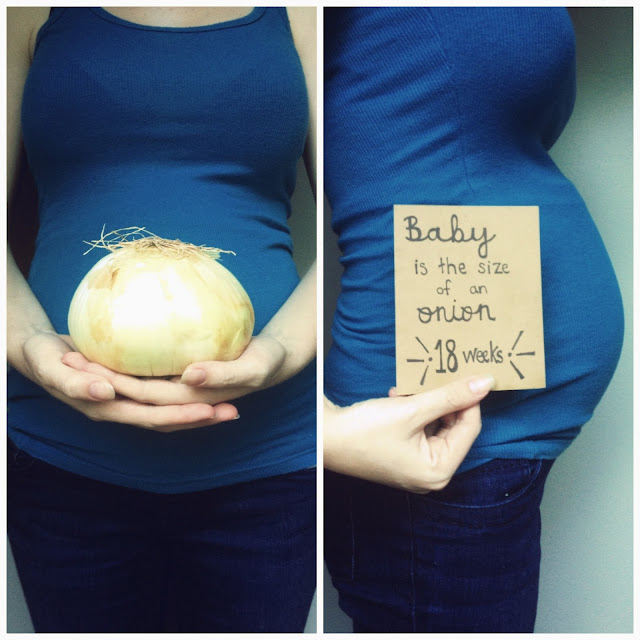 Baby is the size of an awkwardly large onion... hmm I don't really understand these sizes.
But technically baby is 5.2 inches long and weighs about 9 ounces.

Oh my what a special week it has been.
Tuesday, June 18th at 8:00 am, Michael and I learned we are having a daughter.
Our sweet Genevieve Lark.
Goodness gracious, we are so in love. 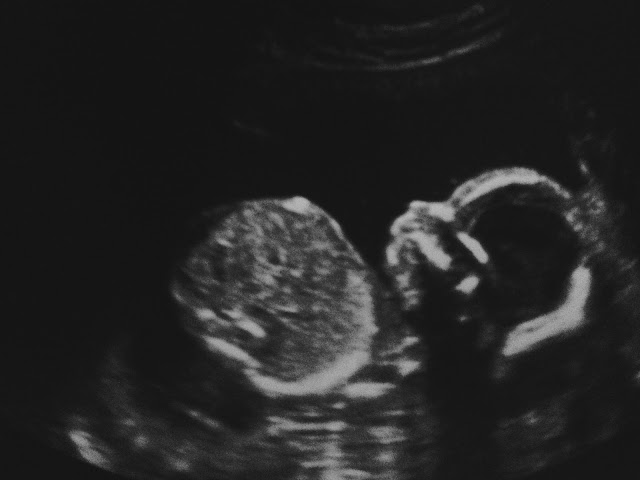 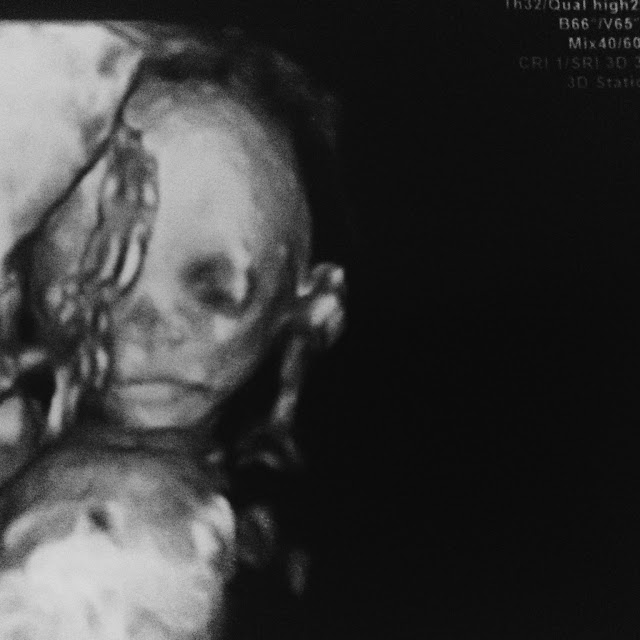 This was our first ultrasound visit so we were really excited and nervous. It was very intimate with dimmed lights and music playing in the background. I had a large screen so I could see everything. It was very peaceful. I didn't realize that it would last 45 minutes. We saw the 4 chambers of the heart, the stomach, spine, brain, fingers and toes to name a few.
The technician kept saying "he" when she talked about the body parts so Michael said, "Um you keep saying he..." The technician said sorry she always reverts to that pronoun but why don't we take a look. And so nonchalant she was like, "Well you are having a girl".
I immediately looked at Michael and said "Genevieve!" I thought I was going to cry.
For those who don't know, since day one, well even before day one, I knew we were having a girl. I couldn't even picture a tiny place in my brain that baby was a boy. I just knew she was a she. But as the ultrasound date approached I started wondering if I was totally off this whole time. Maybe the mother intuition thing isn't real - It was really unsettling for me to feel so strongly about something. But when the tech said it was a girl, I couldn't stop smiling.
I was right :)

We planned a big name reveal that Wednesday for mine and Michael's family.
As I was prepping for the scavenger hunt around East Nashville I saw this sign. I had to take a picture! 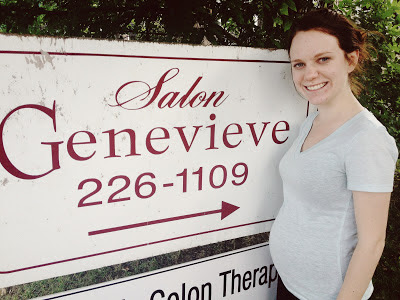 Here is the start of her nursery.
We had pink and purple balloons in the crib with her name pinned on so everyone could see her name. 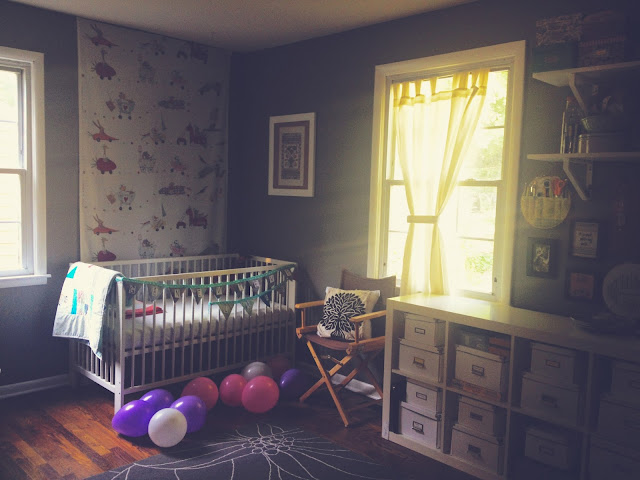 Genevieve
French - White Wave
Irish - Women of the People
Saint Genevieve is also the patron saint of Paris with a fascinating story.

Lark
A song bird
When my father-in-law pointed out that in french it is Alouette, the whole family broke out in the popular french nursery song.
There is also the common phrase, "Happy as a Lark".
I love that larks are depicted in mythology and poetry as the morning bird that brings the start of the day.
Larks are also depicted as the bird that ushers heaven to earth.
I pray daily for joy over my baby. 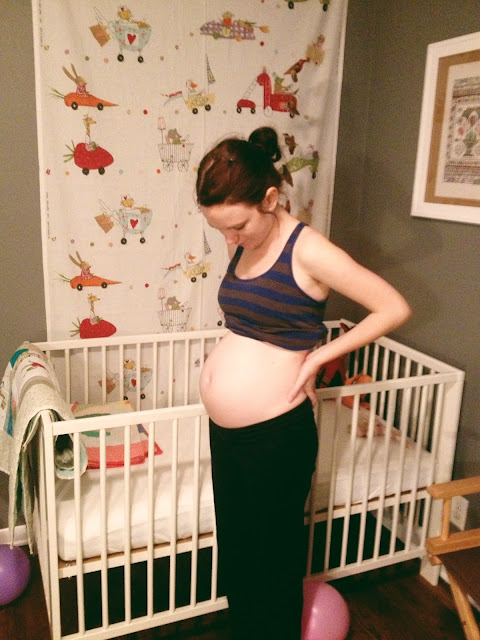 My sweet little bird, Genevieve.
We are so smitten by you already.
You are one loved girl.
Posted by OurUrbanCottage at 8:32 PM No comments: 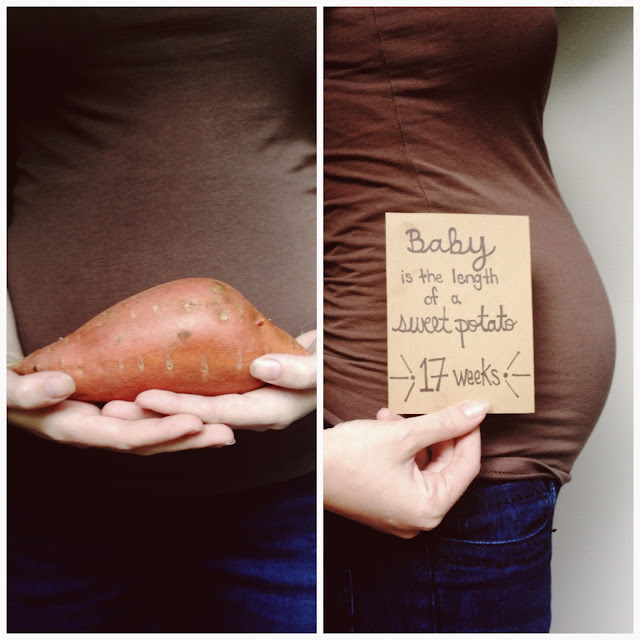 And what a lovely week it was.
Baby is moving so much more and I am starting to feel the rhythm. Lots of morning and evening kicks and I think I can tell the placement of baby. I guess we will know for certain after our ultrasound.

Pregnancy is starting to really enter that magical stage.
My energy level is increasing! My weekends feel a little more normal. I love spending time on our deck and "hanging out" with the chickens. The garden is starting to produce veggies and my creative bug is coming back. Can't wait to start baby projects :) 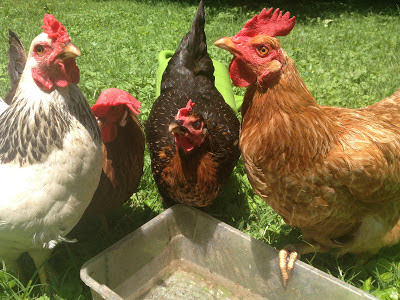 We also celebrated Father's Day!
It was sort of Michael's "first" Father's Day.
I spent so much time reflecting on how much my dad, my father-in-law and my husband mean to me. I really am incredibly blessed to have them in my life. Michael's dad is the sweetest grandpa (Abi) around and I am starting to get a glimpse of my dad as a grandpa (Babu). His Babu voice came out this weekend when he was talking to baby in my belly.
So funny and precious.
And goodness gracious, I can't even start to put into words the way Michael will be as a dad. I have seen him love his nephew and niece and other children in our life with so much compassion. We both take parenting seriously and are overwhelmed/honored/excited to step into that role. I know he will be so hands-on and involved - I mean he already registered for the baby sling he wants ;)
Hopefully in the next few weeks he will get to feel our little one kick.
A really sweet time!
And to top the weekend off - we went to the wedding of Grace Bennett and Eric Willis - a beautiful event. 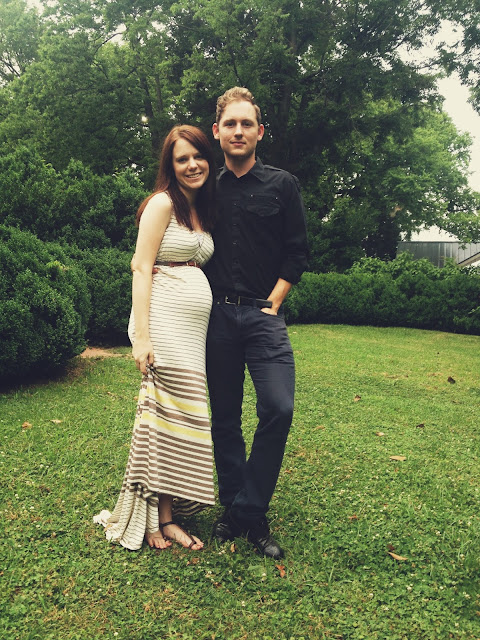 It felt like my 'belly coming out" party. Besides family, co-workers and a few friends, not many people have seen me pregnant in person. I was so great re-connecting with old and dear friends.
Now we wait in anticipation for our first ultrasound!
We are beyond blessed!


Posted by OurUrbanCottage at 11:43 AM No comments: 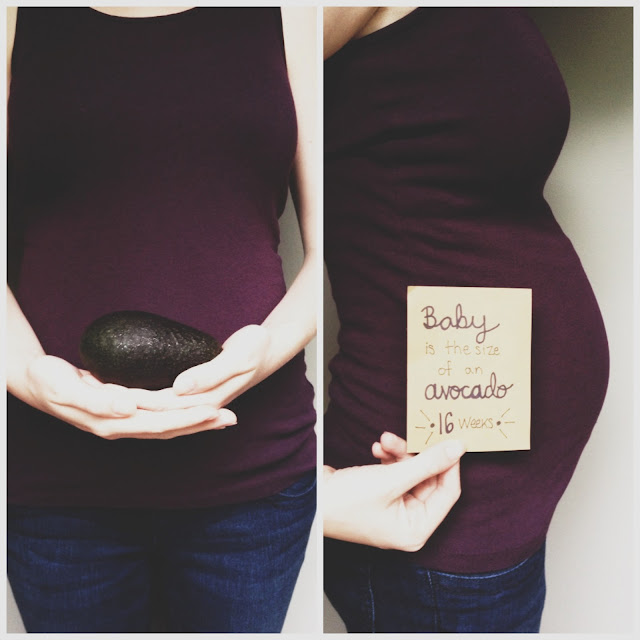 These fruit and veggie comparisons are so funny. It has more to do with length not overall size. But really, babies are all different sizes at this point. So from an orange to an avocado?? Hmm ok.

What a lovely week it has been.
I am more confident that I am now feeling my little one move! I was waiting for a butterfly feeling but never really felt it. Then someone else described it as a muscle spasm/tinge and I have definitely felt that. Actually, for almost 3 weeks now. I love it. I think it feels even more real than hearing the heart beat. I love laying in bed in the morning and feeling my baby move. 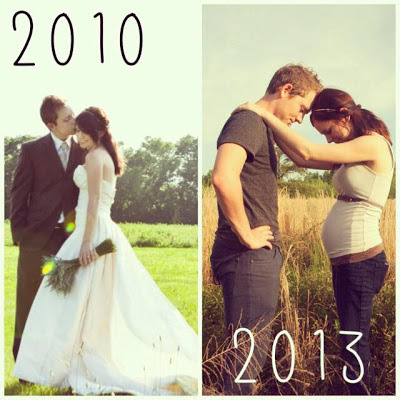 June 5th Michael and I celebrated our 3 year wedding anniversary.
June 6th we celebrated 7 years of being in love.
We feel so blessed and are beyond excited for this next year of our life. 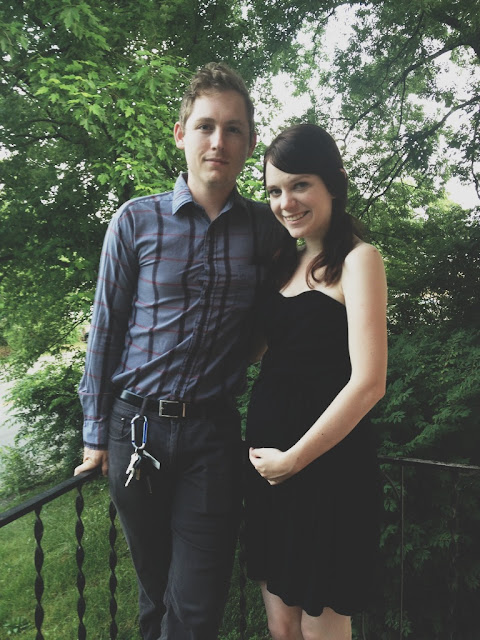 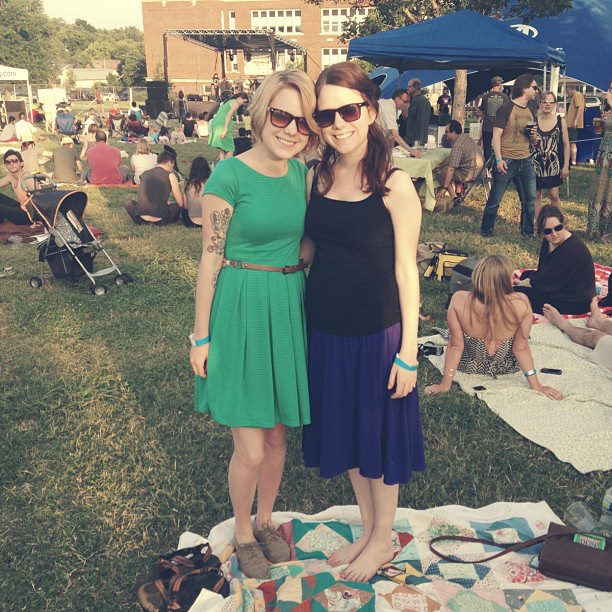 I love Nashville.
I love all the free festivals and events.
Enjoying the East Nashville Hootenanny with family and friends. 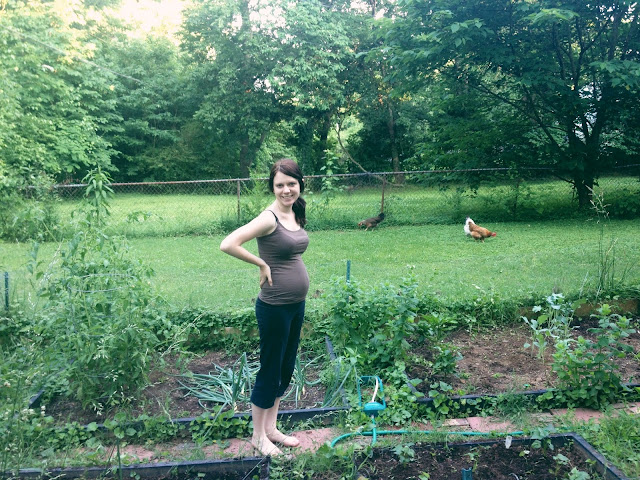 Oh the weeds...
We definitely planted less this year knowing full well that my pregnant self would not like gardening quite as much as last year. But 1st trimester really set me back! It was wonderful getting back into the garden. I love growing these plants while I grow a baby. There is something therapeutic about the whole process. 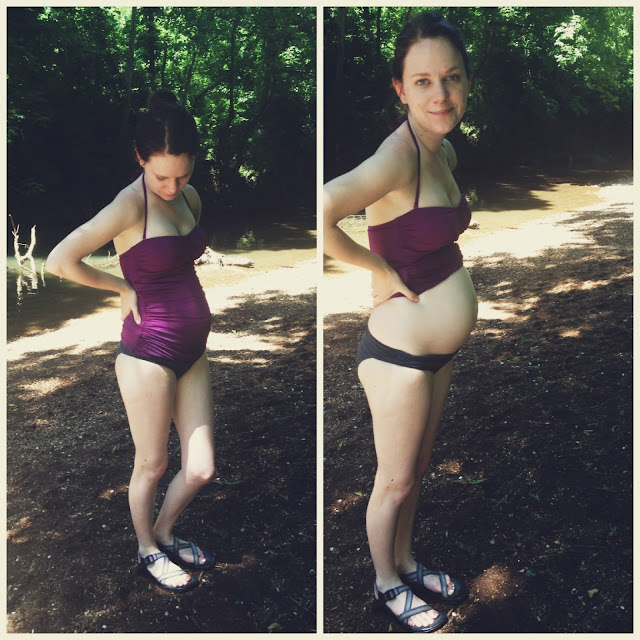 Eeek! My belly seeing the sun for the first time in a LONG time.
It was so great spending the day with Becca & Jonathan and Lauren & Evan.
I also loved swimming at Edwin Warner Park. Just a great day all around.

I am so grateful for such a supportive family! My mom surprises me with maternity clothes and my sister patiently listens to me ramble on and on about the latest baby thing. She is going to make the BEST aunt ever!

I also can't imagine going through this journey without Becca Moody.
Read her blog here.
We just started a pre-natal yoga class together and we are signed up for the same birthing class. Having that support and camaraderie has been such a blessing for me. I am so excited for when are babies (probably 1 week apart) will have play dates :)

Starting to get my pregnancy rhythm and really loving this season.

Posted by OurUrbanCottage at 1:46 PM 9 comments: 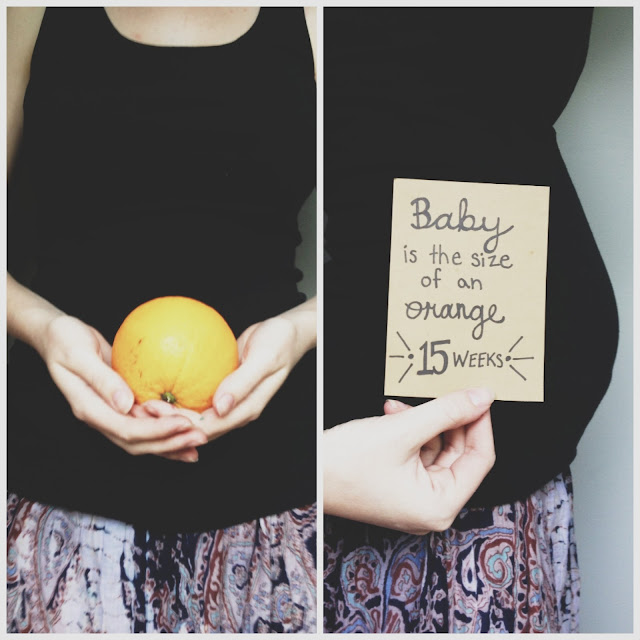 Our baby is the size of an orange!
This orange seems a little big but it was all I had.
This week I got very sick. I had about 4 days of feeling plain awful. But it was probably the first time that I felt like a mother. I remember throwing up (sorry tmi) and thinking I don't care if I am sick I just don't want my baby to be hurt. I've never had to think about my baby in that way. It was like a switch turned on. So despite the ickiness, I felt closer to baby this week, which was special.

And I *may* have felt the baby move this last week :)
I haven't felt it enough to confirm but I am thinking in the next few weeks I will know for sure. Ah, I can't wait to feel my baby more often. 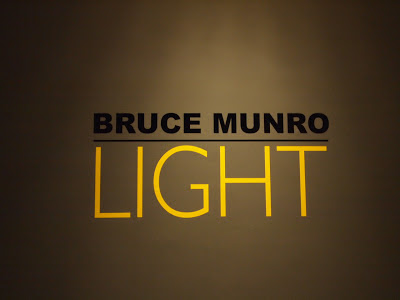 Michael and I joined his parents at Cheekwood last week. We saw the Bruce Munro's "Light" exhibit. It was so beautiful! 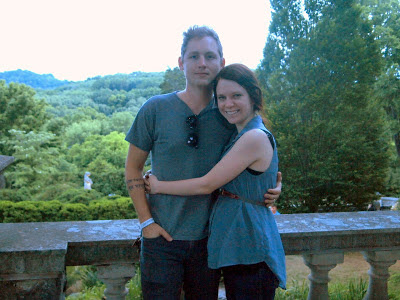 There were lights set up in all the gardens. 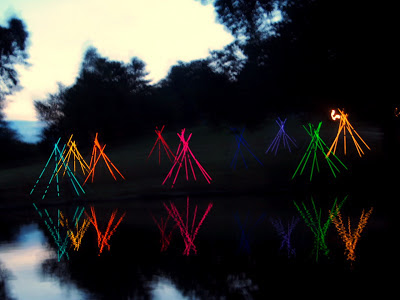 The one in the Japanese garden was my favorite.
It was like thousands of sparkly fairies in the bamboo. 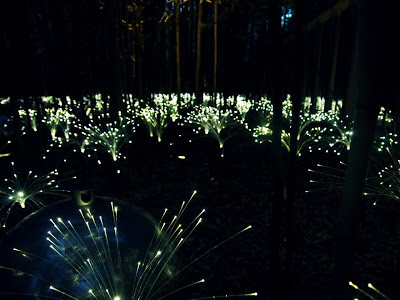 The most impressive light exhibit was the one below. 20,000 lights across the grounds of Cheekwood. That was pretty magical too. 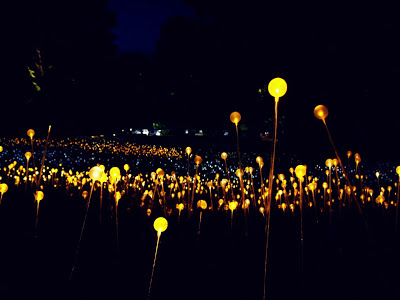 That was the perfect way to end my week of being sick.
One week closer to meeting our little one and now starting month 5!
Posted by OurUrbanCottage at 2:08 PM No comments: